Federal State-Funded Educational Institution of Higher Vocational Education “Yaroslav-the-Wise Novgorod State University”(NovSU), established under the resolution of the government of the Russian Federation from June 30, 1993 No. 624, is the largest higher education institution in the Novgorod region, which carries out its activity in accordance with existing legislation and normative acts of Ministry of Education and Science of Russian Federation.

The University was established in 1993 by merging two oldest higher education institutions of Veliky Novgorod: the Pedagogical and Polytechnical Institutes. Later on the Novgorod Agricultural Academy was included into the structure of the University. 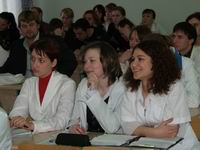 It is not occasional that the Novgorod State University has Prince Yaroslav's name. In the year of 1030 Yaroslav the Wise came to Novgorod the Great to teach priests' and seniors' children reading and writing. It is quite a fact that education was of vital importance in the Novgorod system of spiritual values in the 11th century. Existence of schools in medieval Novgorod can be traced in birch bark letters, chronicles, hagiographies. As the time was passing by, not only schools but theological seminaries, gymnasiums, libraries were established. That is why Academician Yanin, the famous investigator of the ancient Novgorod called it "the cradle of the Russian education". Thus, the Yaroslav-the-Wise Novgorod State University became successor of the oldest educational tradition.

On the eve of the University's first anniversary Prince Yaroslav-the-Wise's personal seal was discovered during archaeological excavations. Academician Yanin considered it a remarkable coincidence and suggested awarding the University the name of the Russian prince. The official consent was received without delay.