NovSU Alumni and International Students about the University 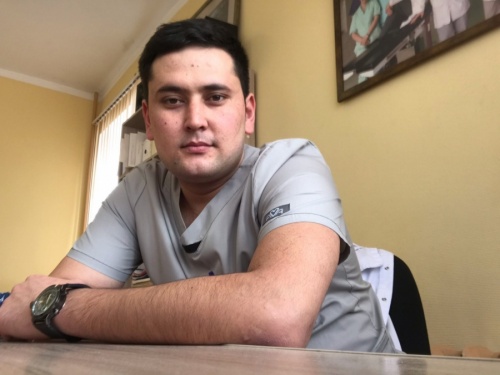 "NovSU is a wonderful university! It has a huge educational base. University teachers are interested in providing students with as much practice as possible and preparing top-level specialists. It is encouraging to see how science and extracurricular activities are being developed at the university. The university has created wonderful living conditions for students who came from other cities and countries, the dormitories are clean and tidy. Currently, I am working as a surgeon at the Novgorod Central District Hospital. I would like to thank the university teachers and all employees of the International Students Office for everything, thank you very much for your work." - Alisher Rakhimbaevich Sapayazov, a 2018 graduate. 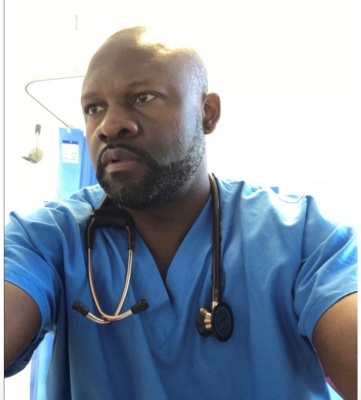 "I graduated from Yaroslav-the-wise, Novgorod State University, Institute of Medical Education in 2001. I have been working as a doctor in England for over 14 years now. I live in the city of Exeter, which is located in the South West of England. I am currently working as a General Practitioner (Family doctor) in a small practice. I had the best years of my life living in Novgorod and studying in NovSU. In my opinion, the educational programme at NovSU was the best compared to any other Russian universities. The tutors and mentors were very approachable and supportive. This support was very important to us, international students. The locals of Novgorodskaya Oblast are the most welcoming people compared to any other cities I visited in Russia." - Dr Marcel Nche Anye M.D MRCGP, a 2001 graduate.

Mohammed Mustfaa Jasim, Iraq (History):
Mustfaa Jasim has come from Iraq to get a master’s degree in history in Novgorod State University. He admits that studying was difficult at first. He remembered that after he had been studying for 3 months, he could only understand 20% of lectures. In order to adapt faster, he preferred to refuse the dormitory for foreign students and insisted on transferring him to the dormitory where Russian students lived. Now he is proud to say that he has a lot of friends.

The student also spent 2 weeks in the archeological school in Staraya Russa. Together with the participants of the NovSU Starorusskaya archaeological expedition, he worked on the Pyatnitsky excavation and studied the XIII century layers. Mustfaa Jasim says that the archeologists’ approaches are completely different. For example, it was unusual for him that students and schoolchildren can take part in the excavations along with professionals.

Khushnud Rachabzoda, Tajikistan (General medicine):
Khushnud has chosen his profession long ago. He wanted to become a famous surgeon and entered the university to fulfill his dream. First four months of living in a foreign country were really difficult. Though people speak Russian in his native country, it was hard for Khushdun to understand the grammar.

Khushnud remembers that there were a lot of international students from Gabon, Morocco, Uzbekistan, etc. with whom he couldn’t speak Tajik. So he had to communicate only in Russian. At first, he felt sad, he didn’t know anyone, had no one to talk to or go for a walk with. It was a really tough time. But now Khushnud got used to his life in Novgorod: “The city is very quiet. There is a wide river here and fresh air. That’s what I like.”

Fozil Kurbonaliev, Uzbekistan (General medicine):
When he was a child, Fozil decided to become a doctor. After school he finished college and got a paramedic diploma. Then he worked in the ambulance and reanimation department. To enter Russian university, he has studied at the “Alfacom” center in Tashkent for a year. Now he is a “General medicine” student.

There is much competition in Uzbekistan: 20-30 applicants per place. Studying in Russia is also cheaper. And if you manage to pass the session without “Cs”, you can switch to a state-funded mode. Fozil estimates that his education will take 9-10 years. First at NovSU, then residency or postgraduate studies in Moscow or St. Petersburg. And after that he will return to Uzbekistan. The young man wants to open his own medical clinic there, a cardio center.

Ruzaliya Gataulina, Uzbekistan (Dentistry):
Ruzaliya received a red diploma of a medical lyceum, she also got high scores at the NovSU entrance exams and managed to enroll to the state-funded education mode.

Nevertheless, the first month of studying was a very tough one, it was hard to adapt, the student even thought about transferring. But a month later Ruzalia understood that it was the right place for her. She liked the university and the teachers. The girl simply missed home very much.

Ruzalia has become a volunteer for international students. She communicates with students from far abroad and helps them to adapt to new copnditions. She understands how difficult it is to live in an unknown place. Local students helped her to adapt in Novgorod.

Kamilla Mamytova, Kyrgyzstan (Special (defectological) education):
Institute of Continuous Pedagogical Education student, Kamilla Mamytova came to Veliky Novgorod because she wanted to become a disability specialist, to work with disabled children and with people who have lost ability to speak as a result of an accident or a heart attack. In Kyrgyzstan she could only become a speech therapist, but it wasn’t the specialty she wanted.

Kamilla studied different languages, looked for a proper university, but she didn’t want to go far away from home. At first the girl knew nothing about Novgorod, but it happened that it suited her in all respects. The city attracts Kamilla with its calmness, even immediately after moving it was easy here. A lot of people leave Kyrgyzstan for good after graduation. But Kamilla is going to work at home. Because the children who have made her choose her specialty are there, they have no help and no development.

Amelia Zarina Vash, Angola (General medicine):
Amelia Zarina Vash is stydying “General medicine” in the Institute of Medical Education. When she first arrived, the conditions in the dormitory for international students were very poor. There was no shower, they had to make repairs. Sixteen people chipped in for a washing machine, refrigerator, linoleum and wall paint.  They bought new beds, which then cost rom 6 to 8 thousand rubles.

Nevertheless, in general, Zarina mentions that Veliky Novgorod is a good city for students, it is comfortable to study here. She is already undergoing an internship and has worked with “Azot” patients. According to the student, sometimes Novgorodians react negatively to dark-skinned doctors and do not want to accept their help.

Leticia Ntumba Tshimpanga, Zambia (General medicine):
Leticia wanted to become a doctor since her childhood, her father is a gynecologist. Leticia’s best friend studied in Veliky Novgorod. She advised her to enter NovSU because it is a good university.

It was very difficult at first. Leticia did not understand anything at classes. Russian language was not easy – a lot of cases, difficult grammar. The student is sure that if there was an opportunity to study in English, it would be better. The student also thinks that it would be worth giving more practice: “We have practice only in summer. In the first year we worked as nurse assistants. We gave injections and put patients on a drip. And the second year is the same. In the third or fourth year you are already a doctor's assistant. You can watch, go to surgeries and that's it.”

Victor Kudimuena Ojvaldo Paulo, Angola (General medicine):
He is studying “General Medicine.” “It was very hard right after moving to Russia”, he recalls. “It was difficult to live in the dorm because the atmosphere was different. In the dormitory, there is almost nothing that was at home. There is just a bed, nothing else. Didn't expect this. We have renovated the room. Now I'm used to it. When I arrived, it was difficult.”

Learning Russian was especially difficult. At first, Kudimuena said that he hated this language. But he did not give up, people around him supported and encouraged him. It was scary to speak Russian, because he was afraid that people would laugh at him, but he overcame his fear and spoke to strangers in the streets. Now the young man has Russian friends who help and correct him.

Muhibullo Abdullazoda, Tajikistan (Dentistry):
Muhibullo Abdullazoda came to Russia from the capital of Tajikistan, Dushanbe. Just like his father, he has chosen a medical specialty, and now studying to become a dentist. At first, Muhibullo studied at a medical college in Dushanbe, then he entered Tajik National University. He was going to enter Kazan Medical Institute, because he has chosen a rare specialty and wanted to become an immunologist. But after moving to Russia, he decided to enter the NovSU Dentistry Department: “I thought that dentistry is just as good as immunology. You can give people a smile.”

“I am glad that this is how it happened, because good and highly qualified specialists teach at Novgorod State University. Moreover, the conditions are good. This is not the first year I have been studying, I never had to think about starting to work faster or becoming an assistant, because we have all necessary conditions. We manage to get both enough, knowledge and practice,” says Muhibullo.

Ayub Baji, Morocco (General medicine):
In 2010 Ayub Baji came to Veliky Novgorod to study from Morocco. He entered the Novgorod State University preparatory faculty, studied Russian for a year, and then became the Institute of Medical Education student.

Now Ayub is studying in residency at Novgorod University and is working as a pulmonologist in Novgorod hospitals. He speaks several languages ​​and gives lectures for international students.

Ayub admits that then, in 2010, he knew nothing about Veliky Novgorod. “Now I see that the students know Veliky Novgorod very well. In my country, Novgorod State University has already become famous. A lot of personnel have left a good impression after graduation,” he says. When Ayub was an applicant, there was not enough information. And all the pages on the Internet were in Russian.

According to Ayub, his student life was both difficult and interesting. He had to get used to a different climate, there was a language barrier, he missed his family. Ayub worked really hard to get a diploma and become a doctor. He believes that Veliky Novgorod is a city for students. Quiet, calm, small, not much entertainment, so that you can study. The atmosphere here is good for studying.

In 2017, after graduation, Ayub started working as a pulmonologist at the central district hospital. Sometimes he sees patients at the regional hospital and at the tuberculosis dispensary.

Rashid Elhabishi, Libya (Dentistry):
Rashid wanted to become a doctor a pilot or to have a career in international relations. But it turned out that in NovSU, where he was ultimately going to enter, only the Institute of Medical Education was suitable for him. And the young man decided to become a dentist.

Studying at NovSU and living in Novgorod was comfortable. But Rashid planned to return to his homeland. To the medical diploma of Novgorod University, which is highly valued in the Middle East, Rashid wanted to add an education in the field of international relations. However, things have turned out differently.

Rashid remembers the years of studying at NovSU with great love. For some time, he taught at one of the Institute of Medical Education Department. As Rashid says, “I wanted to repay the debt to the university that had given me so much. I am grateful to this city for everything I have now. Here I feel at home.”