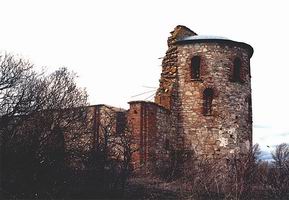 Veliky Novgorod is one of the oldest Russian cities, the cradle of Russian democracy, medieval center of trade and crafts. The first reference to Novgorodas a fortified settlement was found in the chronicle of 859. The scientists still debate about the exact date of the city establishment and location of the «old» town. The opinion prevails that it was situated at so-called Gorodishche, at the right bank of River Volkhov, two km to the contemporary city. It is believed that a Varangian prince Ryurik, who was summoned to the rule in the IXth century and founded the Ryurik dynasty, put his and his armed force's camp just in this place. In the Xth century, this settlement was relocated to the current location (which, according to a version, explains Novgorod's name as «New town»). 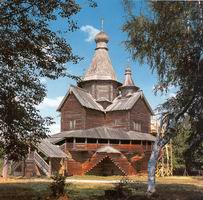 In the Middle Ages, Novgorod governed the lands from the Volga river to the shores of theArctic Ocean. Since the end of the Xth century, Novgorod became next to the most important center of Kievskaya Rus. The city was the earliest international trading centre of Eastern Europe. Its location at the joint of the routes connecting the Baltic rim countries to the Mediterranea («From the Varangian to the Greek») and to the East via Povolzhye (Volgasurroundings), provided for the intensive development of the trade, crafts, and culture. Iron processing, woodworking, tanning, as jewelry craft reached rather high level. 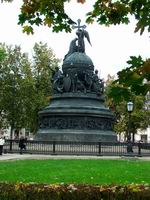 In the era of Kievskaya Rus, the eldest son of the Kiev's Grand Prince by tradition «sat» in Novgorod to gain the experience and learn the wisdom of a ruler. Prince Vladimir, who would later unite all Russian lands as the grand prince of Kiev and baptize Russia in 988, emerged on the political scene in Novgorod. The "illegitimate" son of Prince Sviatoslav and a slave, Vladimir was elected the posadnik or governor of Novgorod. The life of his son, another outstanding statesman of the Russian Middle Ages, Yaroslav-the-Wise, was also closely connected with Novgorod. He was put on the Grand Prince's throne twice, in 1015 and 1019. In 1019 Yaroslav-the-Wise granted Novgorod its independence on Kiev and the rights of a free city, both used to be princes of Novgorod before assuming the throne in Kiev. 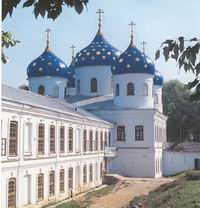 Novgorod is the birthplace of the Russian democratic, republican traditions. In 1136-1478, Novgorod was the capital of Novgorodskaya feudal republic, ruled by Veche - a people’s assembly which made decisions on war and peace, summoned and banned the princes, accepted the laws, concluded the agreements with other territories, and elected «Vladyka» - the archbishop of Novgorod. The city was «free-handed in princes»: a prince was summoned to rule for a certain term, usually, for a war period, and on the conditions listed in a special contract. 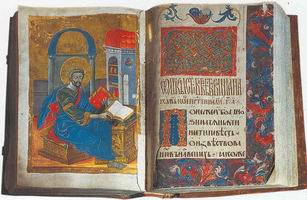 Novgorod is also known as the earliest centre of edu­cation in Russia. In 1034 Yaroslav-the-Wise founded a school for 300 pupils there. The school created favoura­ble conditions for the achievement of universal literacy of the local population, and not only in the city but in the coun­tryside around it too. This is confirmed by numerous letters on birch-bark sent to the city from sur­rounding villages. The plots of land owned by the residents of Novgorodwere sometimes far from the city and a control over them was exercised by means of correspondence. As for the contents of the birch-bark letters, these were daily messages, papers and in­structions on economic matters, polit­ical and military reports. These early records have brought to us the living language of mediaevalNovgorod. Another important date in the history of education in Veliky Novgorod is January 31, 1706. On this day Peter the Great signed a Decree on the setting up of theGreek-and-SlavonicSchool in the city for students of all ages and trades. Two Greek doctors Ioaniky and Sophrony Likhud from thePaduaUniversity were invited toNovgorod for teaching. 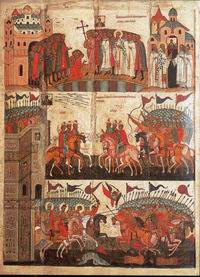 The city played an important role in the development of the Russ­ian art, as it did not suffer from Tatar invasion (although Novgorod Republic was forced to pay a levy to Golden Hord), for many centuries keeping and augmenting cultural treasures of the nation. Its architecture, painting, and applied art formed an original school.The pride of the Novgorod Muse­umtoday is the earliest Russian icon, The Apostles Peter and Paul (11th century). Worthy of note are also St Nicolas of Lipna, one of the first signed icons, created by Alexa Petrov in 1294,The Intercession of the Virgin (14th century), SS Boris and Gleb (14th century), The Battle of the Novgorodians and the Suzdalians(15th century), the "Sophia's tablets" (15th-16th centuries), the icon The Vision of the Sexton Tarasius (16th century) and many others. The museum houses a large number of masterpieces of decorative and ap­plied art created by local artisans. 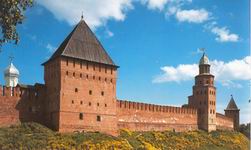 Veliky Novgorod is famous all over the world for its notable repository of architectural monuments, murals and collections of Russian icon-painting and applied art.  Nowadays, the visitors to Veliky Novgorod can enjoy a tour of the unique complex of structures dating from the eleventh to the seventeenth centuries. The main landmark is the Krem­lin (Detinets) which was first mentioned in the Chronicles of 1044. Originally it consisted only of the Bishop's Court. In the early twelfth century the territory of the citadel was extended, but the Kremlin began to be used as a military fortification only at the beginning of the fourteenth century when it attained contemporary dimen­sions and stone walls were erected instead of wooden ones. In the late fourteenth century ramparts were built around the entire city, with wood­en walls and stone towers over them. The walls and towers have acquired present-day appearance at the end of the fifteenth century. 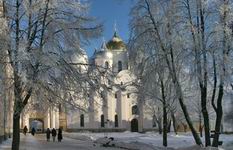 The St Sophia Cathedral in the Novgorod Kremlin is the most ancientchurch of Russia. In 989, soon after the baptism of Russia, a wooden church, "perfectly built and decorat­ed, with thirteen domes", and conse­crated, like the main Orthodox Church inConstantinople, to God Father and His Creative Wisdom Sophia. The unusual church produced an in­delible impression upon Yaroslav-the-Wise. On becoming the grand prince, he erected the Cathedral of St Sophia inKiev crowning it with thirteen domes too. In 1045 Yaroslav's son Vladimir redesigned the St Sophia Cathedral inNovgorod. This five-domed version of the Novgorod ca­thedral has survived to the present day and has largely shaped the tra­ditional Russian five-dome church design. The cathedral has acquired its present-day appearance in 1900, after a large restoration. The famous cath­edral has retained its early iconostasis with icons of the fourteenth to seventeenth centuries, frescoes of the elev­enth and twelfth centuries as well as objects of Byzantine and Western European art. In 1991 the cathedral has been returned to the Rus­sian Orthodox Church. From that time a remarkable national relic of the Russians — the icon of Our Lady of the Sign — can be seen there. 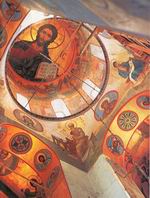 Veliky Novgorod is one of the most important scientific, cultural, and industrial centres of the North-West of Russia. There are theatres, cinemas, concert halls, libraries, art galleries, museums and a wide diversity of shops and restaurants. It is conveniently located between the two capitals, Moscow (530km) and St. Petersburg (180km).   In 2009, Veliky Novgorod will celebrate its 1150th anniversary and at the same time, the Hansa Days will be held here – a largeinternational forum that traditionally summons thousands representatives of old European cities. It will be the first Hansa Days held in Russia.